Ethics in Action Series: Why Do Kids Lie?

“No Mommy, I did not poke the baby. She poked herself.”

How many parents have heard their child lie and wondered “Where did I go wrong?” How many teachers wrestle with the challenge of creating “real-life lessons” about cheating on tests and homework assignments? And how do organizations encourage and foster ethical behaviors in the workplace?

Lying is a pervasive issue in our world and affects all of us. At Character.org, we cannot imagine a world where people don’t care about being honest. No matter how you think about character, it’s hard to imagine any definition that doesn’t include honesty and trustworthiness. 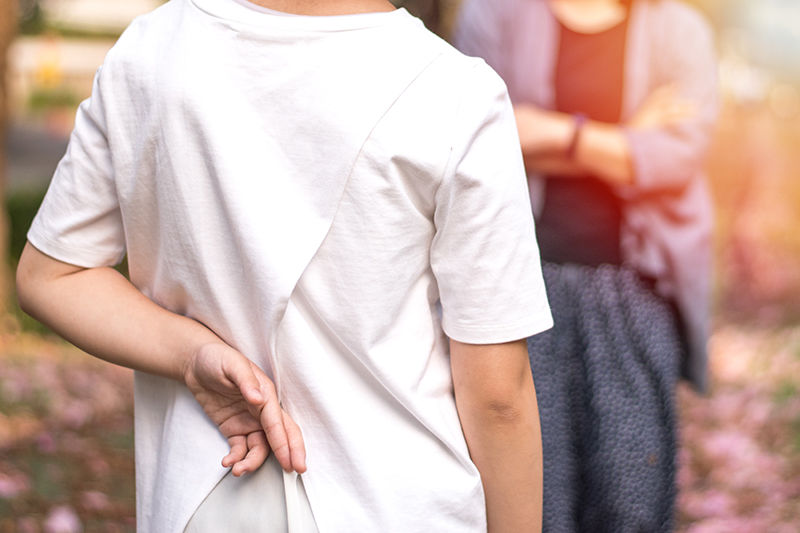 For the next five weeks, I’ll be exploring these topics in our new series about lying.  Following this week’s overview, I’ll explore what parents can do when their children lie. Then I’ll look at what educators can do in their classrooms and schools to reduce lying behaviors, followed by a discussion on what can be done to reduce lying in the workplace. Finally, I’ll end with an interview with an expert in the field.

Researchers tell us that children begin to learn how to lie at around age 3, when they realize others around them cannot read their minds and they can tell untruths without others knowing. Around age 4-6, children learn to match their facial expressions to their words; it’s no longer enough for them to protest that they didn’t commit the negative act; they can also show a face that says “I have no idea how that could have happened.” As they enter the pre-teen and adolescent years, children lie for other reasons, including gaining acceptance from peers, attempting to exercise control over a situation, and wanting attention.

The American Academy of Child & Adolescent Psychiatry indicates lying becomes a serious issue when an otherwise responsible child falls into a pattern of repetitive lying, such as pretending to have completed homework when in fact they are having a learning challenge that prevents them from finishing the work. An even more serious lying behavior occurs when young people lie to cover a more significant problem, including drug or alcohol abuse. While these children or adolescents may feel badly about lying, they are more fearful of the consequences of revealing the truth.

The table below summarizes common lying behaviors and the reasoning behind them.

(adapted from the Child Mind Institute)

Kang Lee points out in his TED Talk that the “necessary ingredients” associated with lying – mind-reading and self-control abilities – are also essential skills for a young person to develop for empathy and goal setting. His perspective on lying is that it’s usually a typical part of human development rather than just a black-and-white issue of “bad behavior.”

Our challenge as parents, teachers and coaches is to teach, reinforce, and model the importance of being honest for its own sake. That’s why we’ve created this series:  To equip adults with the tools and strategies to inspire young people to be honest because this core value has become an integral part of their character.

As I explore this topic about how to empower children to be honest and tell the truth, my goal is to confront this challenge as a champion for honesty. We can do better than to simply tell children they will be punished if they are caught lying. We also can’t accept the argument that “everyone lies, so it’s no big deal.” It is a big deal. What’s more important than raising ethical and honest young people?

Watch for the subsequent parts of this series and sign up to receive the “Ethics in Action” blog and webinar series in your inbox:

In the months ahead, our series will also explore Why Do Kids Steal? and Why Do Kids Cheat?