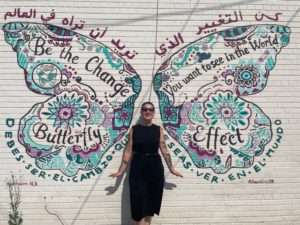 Poor Richard’s Almanac is full of classic character wisdom, such as “Haste makes waste,” and “Don’t throw stones at your neighbors if your own windows are glass.” Benjamin Franklin also wrote in “The Art of Virtue” about a process of identifying and striving toward 13 character virtues he deemed of paramount importance. I found inspiration in this passage and decided to go on my own character virtues journey. I started by reflecting on positive feedback I’ve received in performance reviews but quickly realized that virtues go beyond work and school. So I shifted gears and started thinking about interactions in the world and at home that I’ve felt really good about. Much more difficult but arguably more important, I next had to think about times when I wished I had done better and why: these would become my virtues for improvement. I also thought about personal goals I have, such as learning to play a musical instrument or earning a masters degree, and what virtues will help me achieve them. After lots of reflecting and some teaming with family members, I arrived at my list of 8 essential character virtues: accountability, empathy, nondiscrimination, optimism, humility, active bystanding, lifelong learning, and compassion.

First, accountability. For me, this starts with setting goals. When I was a sophomore in high school I wanted to jumpstart a healthier lifestyle, so I committed to running Monday through Friday during the first week of my push for health. On one of the days I forgot my running clothes at home and could have easily skipped the run. However, I felt a strong sense of personal accountability, so I ran a quick mile in the jeans I had worn to school that day. The virtue of accountability is certainly helpful for meeting deadlines at work, but it also allows me to be a reliable friend and to make consistent progress toward projects such as continuing my fitness goals.

Another virtue of strength for me is that of empathy. When I conducted home visits for children with disabilities, empathy allowed me to relate to the uncertainty and fear families felt in light of new diagnoses. Generally, these visits involve a lot of paperwork; with up to 10 home visits in a day it is easy to barrel through these forms to stay on schedule. However, I remember working with a mother of four for around two hours on one appointment, because that was the support she needed with her newborn son. Empathy like this comes in handy when I meet new people, approach topics on current events, and navigate my marriage.

Nondiscrimination is the next virtue on my list of eight. I am currently doing a summer internship program in DC with many other college students. Interestingly, a growing majority of my peers do not wear face masks on the DC subway despite federal regulations still requiring them. I often find myself categorizing the mask wearers and the nons, taking mental notes, and making further character assumptions based on their categories. But in reality, how can I know someone’s political party and character traits just based on whether they remembered to put on their face mask? I can never really be sure until I talk to the person, learn their story, and avoid judging and jumping to conclusions.

Next comes optimism.  I am great with short term optimism: being stuck in traffic but remaining thankful that I wasn’t in the wreck that caused traffic or embracing a wrongly prepared food order as a way to try something new. However, on a larger scale I struggle with committing to projects in fear that the work will be futile. I am discouraged from pursuing educational policy because I expect my work will not change the world, and I shy away from political debates because I assume I will be unsuccessful in changing someone’s mind. My next step for this virtue may be to adopt an approach of learned optimism.

Another virtue with which I hope to improve is humility. This is the only virtue on my list that is also on Benjamin Franklin’s list. To put it directly, my spirit animal is a mule; I am certainly a passionate, hard worker, but I will continue to pull a broken plow instead of logically changing the wheel and working smarter. My improvements with humility may start small, such as resigning myself to accept looking silly on the sidewalk when I turn around from going the wrong way as opposed to going around the whole block to avoid being seen. Eventually I may conquer my pride by asking for help with pulling a very heavy plow.

The virtue I most hope to improve upon is that of being an active bystander. A lot of examples come from my work in restaurants: co-workers are quick to belittle a customer’s demands after they leave the drive-thru window or complain about a supervisor in the secrecy of the break room. I have always been one to silently nod in agreement to avoid altercations, but the nobler thing to do would be to point out the customer may need to avoid allergens or to remind co-workers of all the strengths a supervisor brings to the table. I hope to find a stronger voice for promoting safe spaces at work, school, and in the wider community.

Another goal on my virtue list is that of lifelong learning. I remember a moment of startling realization I had as a child: even if someone had the brain power to memorize encyclopedias and learn every fact possible about the world, by the time they finished all that memorizing new things would have been discovered. This wealth of available knowledge inspires me to learn about people’s cultures, consume new scientific material, and visit museums and cultural exhibits. For example, my Uber driver recently taught me that his religion allows him to have pet cats but not dogs, and when I visited the National Museum of African American History and Culture I learned about Olympic demonstrators Tommie Smith and John Carlos whom I had never learned about in school. In addition to just facts, I should continually learn new skills, such as my current pursuits of painting and photography. An attitude of curiosity and willingness to learn opens the door to so many exciting opportunities.

Now for my final character virtue: compassion. Legend has it that Franklin began with a list of only 12 virtues. The thirteenth and self-proclaimed most challenging virtue for him, humility, was added only after Franklin’s consultation on the matter with a Quaker acquaintance. I decided to do a similar experiment with my own list. I sent it to my mother, siblings, and husband, and they told me I was missing an important strength of my character. My sister recalled the kindness I have shown to my students and their families, my husband thanked me for the patience I have with his rants and ravings, and my brother pointed out the altruism I show through organizations such as Habitat for Humanity. I combined their kind words to arrive at the concept of compassion to represent the respect and value I try to show to all whom I interact with.

In retrospect, evaluating my priorities in virtue development was a bit like working through therapy sessions or completing a self-help seminar. Often I only consult these tools when there’s a problem in my life or goals I want to achieve. Such activities actually require a lot more introspective work than memorizing facts for a test or creating a presentation for a job. Virtues are not something I actively consider each day, yet they guide my every interaction and decision. I go to the gym to exercise my muscles, eat healthily to balance my nutrients, and read/research to improve my brain. However, for me personally, active character development falls away from the forefront of my mind when rushing through a busy day. Until now! Now that I have completed the Benjamin Franklin exercise and worked with Character.org, I have a compass of priorities to guide my daily decisions. I have a framework for evaluating my successes and shortcomings, and perhaps I will devise weekly charts and tables as Franklin was known to do. Of course, I don’t expect to achieve perfection–even Benjamin Franklin fell short of that!

Holly Whisenant is a student at the University of Tennessee and worked as a Research Associate with Character.org over the summer of 2021. She has a background in early childhood education, aspires to travel the world and learn a new language, and currently lives in Knoxville with her husband Wesley and their cat Guillermo.